Photos from the Street, A Crazy-Graceful Indian Celebration

Dipam is the time of year when a flame is lit on top of the sacred Mountain Arunachala in South India – a flame so large it can be seen from several kilometers away. For centuries the fourteen kilometer route around the Mountain’s base has attracted devotees, spiritual pilgrims, beggars, vendors, monkeys and dogs in a constant parade of life. The once dirt road, is a paved thoroughfare, and barefoot walkers take to the road to circumambulate Arunachala for blessings.

Large trees line the most quiet part, where pilgrims can visit numerous shrines and temples dedicated to various Hindu deities, and continue on to the thousand-year old Arunaleshwar Temple downtown. On each full moon, hundreds of thousands of people arrive from surrounding cities to walk around the Mountain, during Dipam the numbers swell to an estimated two million. If you are in Tiruvannamalai preceding Dipam, the converging of so many people in such a short time feels like a human tsunami. People roll into Tiruvannamalai from everywhere, from all directions – buses line the roads all over town and are parked in every available space. Dipam feels like part holy pilgrimage, part family outing, part joyous festival – one huge chaotic yet orderly cavalcade and in the center of all this hub-bub stands the Sacred Silent Mountain.

In the morning prior to the lighting, a friend and I walked against the flow of the human stream to a temple in town to listen to the chanting of the Vedas, India’s sacred scriptures. Indian people, use to being jostled here and there, easily parted like the water before Moses so we could make our way through.

On our walk we saw a red-clothed man standing before a cow adorned with flowers, turmeric powder and ash. Only when I saw a fifth-leg, hoof and all, hanging from the top of the cow’s haunch did I realize this cow had an unusual deformity. In a country where cows are sacred, this cow was a special form of divinity. She was also a “cash-cow” for her owners who had a blanket spread out on the ground to collect donations.

Standing in front of the cow, I felt such a strong presence I reached out to touch her nose. At that moment a wave of love passed between us. My friend felt her loving awake presence too.

Further along the road, a silver-painted man who looked like Gandhi stood motionless as people stopped to gawk and drop coins at his feet. When the crowd did not move on, the Gandhi “statue” suddenly came to life berating the onlookers and gesturing them to move on.

Half-way to our destination, two friends dressed in white saris riding a scooter passed us, also going against the crowd that parted to let the crazy foreigners going the wrong direction by. The beauty of India, is that it accommodates for everything.

On my walk back, this time moving with the flow of the crowd, I felt surrounded by a sea of Indian grace – everyone seemed to be having a good time, stopping at the temples for blessings, placing hands over devotional fires, whispering in the ear of Nandi for a blessing, talking on cell-phones, enjoying a free meal, laughing, praying, chanting, paying homage to the sacred Mountain Arunachala – a massive stream of humanity moving as One Body along the road in peace. 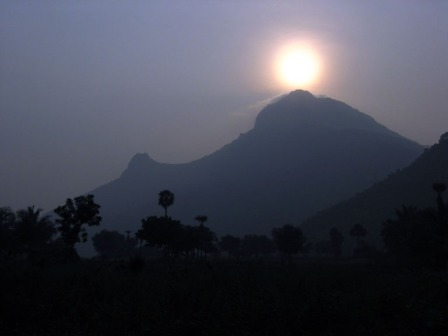 3 Responses to Walking the Peace Mountain