It’s the cows and the bulls…!

And this is the season in India when they are honored and given their due. After all without them many a field would go unplowed, many bricks, sand, and bags of rice would go undelivered, and the milk, the steady flow of it from all those udders! And of course dung for the fields and for fuel.

In the village, if you don’t have your own cow, daily milk is delivered by the milk man riding a bicycle or on a scooter, carrying the milk in cans and stopping wherever he is summoned to pour out one liter here, half a liter there. In India, not much would get done without a morning and afternoon drink of chai (milk tea). And there is no such thing as a chai without milk!

This past week the traditional Pongal celebrations took place in Tamil Nadu. It is four days set aside for a harvest thanksgiving and a time to visit friends and family. One day, called Cow Pongal honors the cows and the bulls. First they are washed, their horns painted, flower garlands placed around their necks and in some places a special ritual is performed by a priest in their honor.

On this day, Ramanashram celebrates the yearly ritual inside a building where the cows are milked. During the time when the great sage Ramana Maharshi stayed at Ramanashram, he had a special fondness for a cow named Lakshmi. Her shrine can be seen at the back of the ashram and during Pongal, the stone cow statue is adorned with a silver-plated covering.

Today’s Lakshmi and her calf stand inside the cowshed surrounded by other cows and devotees who crowd in to witness the ritual. Afterward Lakshmi and her baby receive loving caresses from several hands then are taken outside along with the other cows. 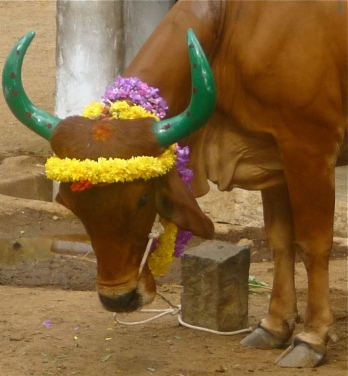 Every day cows and bulls give so much in support of human life. At least on this day they are the focus of loving attention.

Soft-eyed cows, bountiful givers – reminders of the sacred essence in all forms. 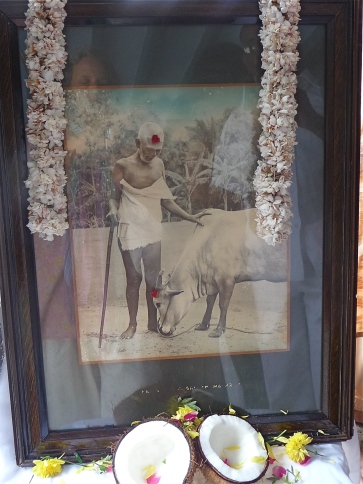